Our October camp was based on the Pioneer badge instead of hiking due to the foot and mouth situation. Fifteen Scouts went on the camp to put into practice the skills learnt in the troop room. Due to our usual camp weather is was “pouring down”. The first structure the Scouts built was a shelter from tarpaulins and poles before receiving instruction in the use of pulleys, levers, tightening ropes and the handling of heave pioneering poles. Next came some fun, after instructions in the use of throwing lines and how to tie a monkey knot we spent the next hour rescuing Scouts from and imaginary river. With the rain now stopped we built a fire and spent the evening making and eating toast over a large bed of embers.

On Sunday the Scouts were set a pioneering challenge. They were split into three patrols, one patrol was stationed each side of an imaginary 30 ft wide river and the remaining patrol on an island in the middle. Each patrol was provided with a throwing line. On one bank were 3 fifty feet ropes, on the island were two 12 ft and one 8 ft pole and the Scouts had to build the means of crossing from one side to the other. After two hours a successful monkey bridge was built and the task accomplished as shown in the photographs 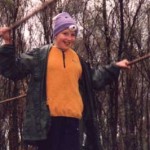 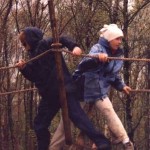 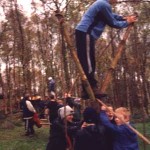 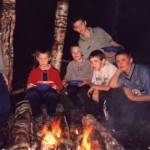 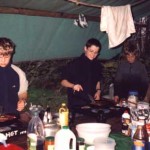 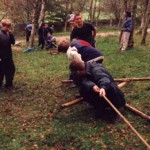 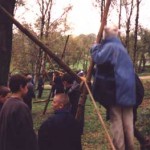 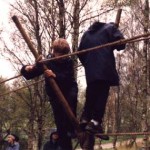 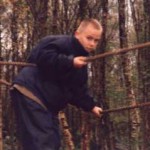